References in Other Anime and Manga

Wooser has managed to get himself in some other anime as a cameo from a few anime within the same company and has also collaborated with merchandise from other characters that have not appeared in the anime franchise at all. Here are the cameos and sightings of Wooser when he's in a different series.

There was a wave of merchandise where Super Sonico had teamed up with Wooser and Rin in a few pieces being a wallscroll-type poster and a clear file.

The main character (Ibeni Akamine) is seen in Tomoko Fujinoki's art style in a cover of ASCII Weekly magazine. Wooser can also be found in a panel of the manga, wearing somebody's panties on his head. 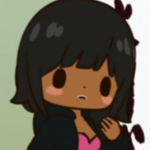